As many of you know, we’ve been fixing up the shed in preparation to turn it into a craft/writing room for me. Yesterday was a glorious day for the electrician came and fixed the old wiring (it wasn’t right) and installed new outlets and a base for a ceiling fan/light set. YAY!!

Here are some before and after pictures:

Before and after light fixture (sorry about the light being on during the before shot): 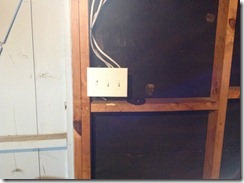 As you can see, he moved the light over a bit so it’s more in the center of the room. He also installed a new switch system. One switch for the light, one for the fan, and one for the outside light (which he also set up—pictured later in post). 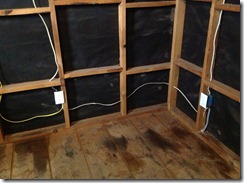 He left the corner outlet and put it on a circuit all its own so it can be used for the portable heating/cooling unit I’ll be using at first. Having it on its own circuit means I won’t have any dimming lights or blown circuits when I want to be cool/warm. He also installed a new outlet on the adjoining wall—because that’s where I plan to have my computer set-up.

The back wall has a built-in work bench area. I debated taking it out, but decided I’d leave it (though we’re going to improve it) so I can use it for my crafting. Before and after shots of the back wall. 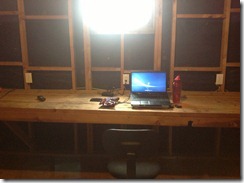 He installed three outlet boxes so I’ll have plenty of power for my sewing machines, glue guns, blender, iron, etc. Yay crafts!! Right now I’ve got my laptop on it (as you can see) and am ready for some revisions (including bag of Snickers—thanks to Kimberley Griffiths-Little)!

Tomorrow is supposed to be the day for insulating and walls. We’ll see how it goes. I’m hoping all goes well and we can at least get the place insulated and the sheetrock up—maybe get the texturing done. But if the texturing doesn’t get done, I’m hoping the door will get fixed, and also the “doggy door” closed off. 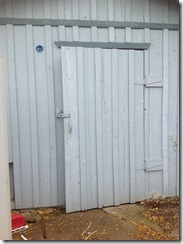 The fixture set-up to the left of the door is for the outside motion sensor light (which will be installed at a later date). This is so I don’t kill myself when trying to go back to the house after a long day of writing/crafting (I’ve been out here writing even though the building isn’t complete and, let me tell you, trying to navigate in the dark isn’t fun). The doggy door is currently nailed shut by a board, but, as you can see, light and air still moves in around it (and it’s a bit chilly today—brrr—I’m wearing a jacket to keep warm).

So things are progressing! The floor will be completely redone after everything else is taken care of (including the painting). I hope the floor turns out as glorious as I’m imagining (I’m doing it myself—more on that later).

Now I’m going to eat Snickers and drink my water (the red bottle in the pictures) and get some revising going (hoping to finish today).

Joan Stradling is a middle grade and YA author of stories with magical elements. She loves baking, crafting, pet wrangling, and anything else she can fit into her schedule. A passionate believer in the power of books, she still hopes to one day ride a dragon, meet a Hobbit, or discover new worlds by walking through a wardrobe. In the meantime, she imagines and writes about her own incredible worlds and characters–and continues to live vicariously through the adventures in other’s books. You can find her on Instagram (@JoanStradlingAuthor) or Twitter (@justJoanS) or FB (Joan Stradling aka Joan Stewart)
View all posts by Joan Stradling, Author →
This entry was posted in Fun, life, random musings, writing, writing space and tagged fun, life, random musings, writing, writing space. Bookmark the permalink.